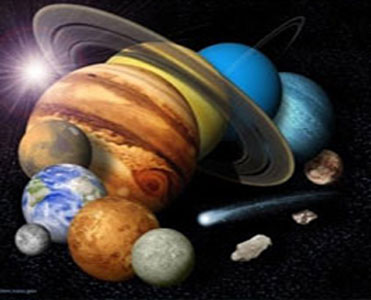 The Self, Spirit, central core of the personality; on a lesser scale, normal ego (“I centered”) awareness; the vitality or life-force of the body; self-awareness, pride, sense of identity; the entire Life-story that a person lives out from birth to death.
Leadership (kings, presidents, leaders), authority figures, the Father; self-expression, artistic or creative work, inspiration; will-power; egocentric, arrogant; anything done “just because that’s who I am”; heart.

Moon
Rules: Cancer
Feelings, instincts, emotional patterns picked up from childhood; the ebb and flow of the mind; sense of security and nurturing; the “matrix” from which the conscious mind emerges, the unconscious; change, flux, flow, timing.
The Mother, the womb (as a metaphor); family roots, heredity, a sense of belonging, home; instinctive reactions to immediate surroundings, moods and feelings; receptiveness; women in general; the workings of the unconscious mind; childhood; stomach.

Mars
Rules: Aries, (Scorpio)
Will-power, desire, ego-expression; active, forceful, assertive; Warrior energy; “I want it, so get out of my way!”; the power to change the world as one wills.
“Men in uniform” (police, soldiers, etc.); younger men; athletes, physically active people; ability to fight, defend yourself, make your mark on the world; individuality, identity, expressions of your separateness from the rest of the world; use of force in service of the ego; head, muscles, blood, adrenals.

Pluto
Rules: Scorpio
Transformation, overhaul, death and rebirth, trial by fire; metamorphosis, radical growth and change; “change or die!”; the “depths”, underground, the unconscious, the unknown; destiny, fate, calling; self-mastery, spiritual warrior, correct and skillful use of spiritual powers; becoming who you were meant to be all along (whether you want to or not!).

Deep, hidden, secretive, powerful, compelling; unconscious forces that override the ego’s desires and redefine one’s fate; the Higher Will; dying to the old self, being reborn; the Shadow, redeeming the “dark side” of the personality; people who work “underground”, miners, psychologist, criminals, secret agents; highly charismatic or magnetic personality; use or abuse of power, overbearing and dictatorial, or a “victim” mentality; sexuality, especially the transformative power of the orgasm; healer, teachers , people in touch with the mysteries of life; dark, brooding, suspicious; penetrating insight, sees under the surface of things, not interesting in superficial concerns; sex organs, bladder, colon.